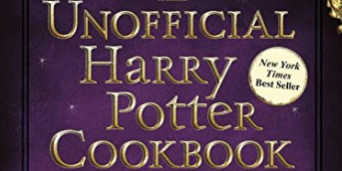 Just in time for Halloween, I have found a cookbook with Harry Potter favourites!

From Cauldron Cakes to Knickerbocker Glory.

More Than 150 Magical Recipes for Wizards and Non-Wizards Alike

Bangers and mash with Harry, Ron, and Hermione in the Hogwarts dining hall. A proper cuppa tea and rock cakes in Hagrid’s hut.

Cauldron cakes and pumpkin juice on the Hogwarts Express.

With this cookbook, dining a la Hogwarts is as easy as Banoffi Pie! With more than 150 easy-to-make recipes, tips, and techniques, you can indulge in spellbindingly delicious meals drawn straight from the pages of your favorite Potter stories, such as:

With a dash of magic and a drop of creativity, you’ll conjure up the entrees, desserts, snacks, and drinks you need to transform ordinary Muggle meals into magical culinary masterpieces, sure make even Mrs. Weasley proud!