The day I met Bryce Courtenay 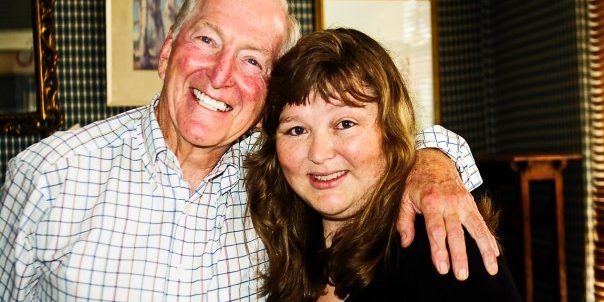 10 Years ago   I won a competition to go to the book launch of Bryce Courtenay’s book ‘The Story of Danny Dunn’. It Included lunch, free books, book signing, and more. I sat next to Bryce and at lunch, he didn’t want to eat his Beetroot and I told him how much I loved it so he put it on my plate and I ate his beetroot.  It still makes me smile 😃
I sat next to him . Every time I talk ed He would squeeze my hand and smile. He talked about his books and the story behind them. I told him about my life story in private and he said that he wanted me to publish my book. wow 😮
We talked about many things, including the fact that his best friend was my Great Uncle – Geoff Pike – who partnered with him on creating the Louie The Fly animated advertisement. Bryce wrote the jingle and Geoff drew and animated the ad. star 🌟
They later collaborated on the Cadbury Yowie – an Australian version of Kinder Surprise that featured information sheets on Australian animals and whether they were endangered, extinct, at-risk or common. The information also Included ecology (habits) and the food they liked to eat. 🐟
I have loved Bryce Courtenay’s book ‘The Power of One’ which saved my life. I was bullied atrociously at school and would not be here today if it wasn’t for Bryce. strong💪
Go to your local library and read his books. You’ll be glad you did.
1. Power of One
http://bit.ly/PowerOfOneBryceCourtenay
2. The Potato Factory
http://bit.ly/thepotatofactory
3. April Fools Day
http://bit.ly/aprilfoolsdaybrycecourtenay
4. The Family Frying Pan
http://bit.lyfamilyfryingpanBryceCourtenay
5. Matthew Flinder’s Cat
http://bit.ly/matthewflinderscat
Meeting Bryce was the highlight of my life. He was an amazing human being and it was a surreal experience sitting next to him and being hugged by him.
I have been working 16-18 hour days since 1991 when I started a Bachelor of Mathematics and Computer Science for one year.
I switched to a Bachelor of Education in 1992, graduating with a Bachelor of Teaching in 1997 then Bachelor of Education in 1999.
I then taught in primary schools until December 2000 when I moved to Tasmania and retired from being a Primary School teacher.
I have been making websites since 1995 and professionally since December 2000.
I focused on working for businesses that I endorsed and believed in. I kept my rates low so I could work with small businesses and then started social media management and mentoring.
Again, If it wasn’t for Bryce my light would have been extinguished in 1997 when I was 16 and was being bullied daily and I started believing the atrocious things I was told.
My life story is going to be called An Instant On The Lips. There is an old saying my mother would say:
‘An instant on the lips, a lifetime on the hips’
So many sayings and phrases like that were used and I now realise
‘An instant on the lips, a lifetime on the psyche’
I have a website http://www.aninstantonthelips.com.au and I mostly focus on food but I will be writing articles and embedding videos that helped me heal and come to the place and space I am in today.
Someone who doesn’t play the nasty or hurtful words of others on a loop until they believe them as fact. Especially words from those with alcohol addiction and where they can say atrocious, toxic, soul-destroying words and sayings that wound and can, unless you release them, haunt you forever and allow them to influence your life.