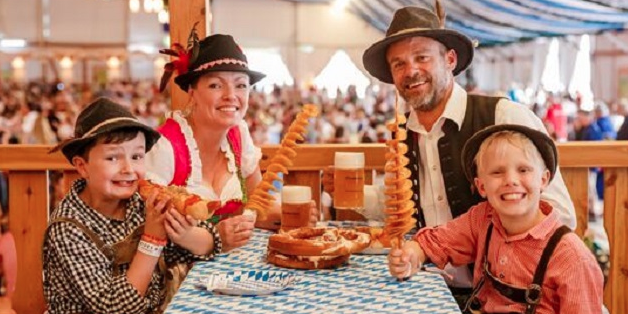 This year my husband Philip turned 70. To celebrate we travelled into Brisbane on the train, checked into our room at the Rydges South Bank and then headed by Uber to the Showgrounds for Oktoberfest Brisbane 2018. We were excited as we hadn’t been to an Oktoberfest since we moved to Brisbane in late 2011. Philip loves beer and a beer festival sounded like a good birthday present.

It was raining intermittently when we left the motel so we asked for an umbrella which the concierge from Rydges was happy to loan us. We arrived at Oktoberfest after 4pm and were disappointed to be told that there was no beer until after the tapping of the keg at 5pm. This was extended out to 5.10pm after ten minutes of speeches. When they did finally finish with the ceremony I waited in line for some Dunkel beer, which I later found out meant ‘Dark beer’. It was delicious and we enjoyed it immensely.

When we first arrived we saw a number of food stalls and the pork roast caught our eye. They were still setting up and asked us to come back in 15 minutes. I returned after finding our seats in the main tent and I was very excited when I was given the tray of pork roast, sauerkraut, potato salad and salad. Philip and I enjoyed it immensely. It filled both Philip and myself and we almost couldn’t fit it all in!

We had an amazing time and we will be back next year.

Love Yourself Retreat by Shine Your Light
October 2, 2020