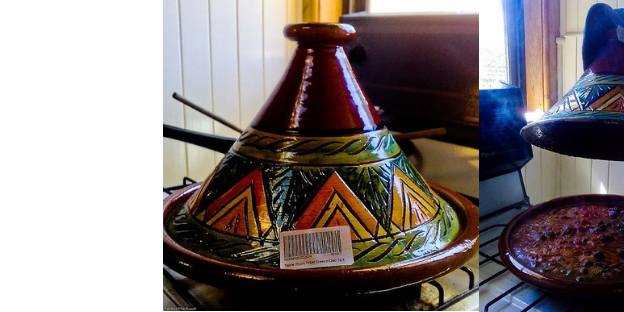 To celebrate our move to the house we bought we had a housewarming and invited some friends and family to a very morrocan lunch of lamb tagine with couscous, whilst the kids had chicken schnitzel burgers.

I am relatively new to tagines, having heard rave reviews for cooking with tagines (also known as tajine – a ceramic pot with dome lid and hole in lid for steam to escape) and the food named after the pot it is traditionally cooked within. Pictured on the left is Stan, an expert cook with an interest in Middle Eastern cuisine.

I decided to buy one online from underpressure.com.au when purchasing a pressure cooker when our antique one needed to be replaced.

When choosing the tagine style we went for a 35cm cooking tagine with a tribal design that makes a wonderful display when placed on the table upon a trivet or wooden board. The guests at our housewarming were most impressed with the smells as it was cooking and the final result. So impressed I wasn’t able to capture some images of the presentation, which included the traditional garnish of an egg on top of the lamb, with a side serving of couscous.

I have added an excerpt from a website devoted to morrocan food, Maroque in case there are other foodies who would like to know more about tagines and how to use them. Enjoy!

What is a tagine?

Tagine is the Moroccan word that refers to both the unique glazed earthenware vessel with a distinctive conical lid and also the food prepared in it.

Traditionally used by nomads as portable ovens over charcoal braziers for making stews, usually containing meat, the tagine is used for both cooking and serving, but care should be taken to protect your table when using the tagine as a serving dish as the base will be very hot.

The conical shaped lid helps preserves moisture in the food as the steam condenses on the inside of the lid. The shape of the lid also creates circulation within the dish, infusing the food with spices and flavours.

The low indirect heat produces a rich, aromatic flavour as the food slowly simmers for hours and the resulting meat becomes meltingly tender.

Tagines come in two types those that can be used for serving only and those used for cooking. We have an extensive selection of serving and cooking tagines.

These Moroccan tagines are often highly coloured and patterned, but are not suitable for cooking and are not dishwasher safe.

Traditional Moroccan tagines: These are made in Morocco of glazed terracotta and ideally require seasoning before use. They can be used in the oven and over a low gas flame preferably with a heat diffuser. These are not dishwasher safe, please wash by hand in warm soapy water.

Other cooking tagines: We have a selection of ceramic tagines on the site in variety of colours and patterns. These are fully glazed and do not require seasoning before first use. They can be used in the oven but not on the hob, and are dishwasher safe.

Seasoning your tagine for first use

This is not essential but will remove any earthenware ‘taste’ and strengthen your tagine.

1. The new tagine needs to be submerged in water for at least 1 hour.

2. Rub the inside of the base and lid with olive oil.

4. Remove from oven and leave to cool.

5. When completely cool, wash in warm soapy water and dry with a clean cloth.

6. Your tagine is now ready to use.

(Source: Maroque – Use and care for a tagine, url: http://www.maroque.co.uk/tagine.aspx)

Recipes and more information at the website given above. Other links can be found below

The Tagine Dream: Classical and Contemporary Tagines from Morocco, Tunisia, and Algeria